Over the past few weeks I have been 'librarian in residence' as part of an art exhibition at Cafe Gallery Projects and aside from engaging visitors with the art on display,  I've answering questions about my own practice.

Despite the fact that my artwork hasn't changed much in style over the past ten years or so (compare The Weimar Years (2005) with In Explanation of the Book ( 2011)), I still find it difficult to describe. Although this must be a common experience for many contemporary artists,  I think it is compounded when it comes to art that involves books.

I think there are two reasons for that:

The first reason is that more and more people I speak to have heard the term Book Art. A shortcut like this can be useful when speaking about someone's art practice, however the term Book Art can incorporate vastly different types of art. Just looking at the art that Egidija,  George and I produce - we can see that each work can be structurally and conceptually diverse (From Egidija's Damnatio Memoriae to George's The Mind Follows and my Book Becomes Book).

The second reason is that each of us has a whole personally history with books and therefore a lifetime of associations.  Depending on our reading habits and preferences, we can all have a slightly different relationship to the same everyday object.

Seen from a different perspective these preconceptions and these differing understandings make for a rich in-depth discussion and add layers of meaning to the artwork, making the creation and the viewing, a much more rewarding experience.

words to be read aloud

Often we talk about what goes into a book but not the potential the book has to broadcast outside of itself. There is a performance element to the book that leads it to be read.  I am going to be exploring an artist whose main concern is text as it is read and also exploring the book as a performance space to be read from. 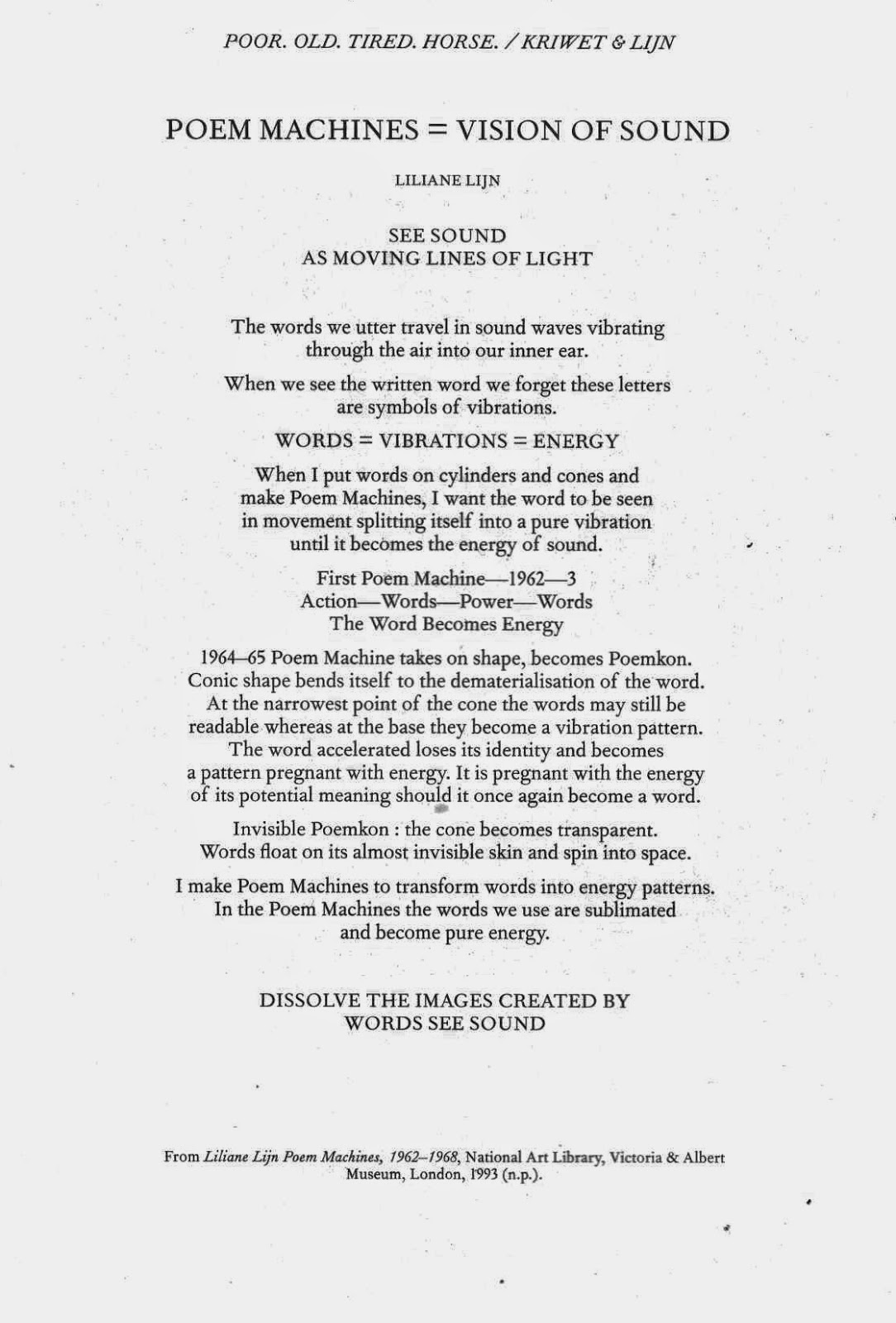 Liliane Lijn works with text as it should be read. Though not within a book, the way she explores reading is fascinating. I think the way that reading is controlled and paced through her sculptures has a lot in common with the book.  Poem cones with words printed on rotate, so that words near the top where the cone is narrower move slower and words near the bottom where the cone is wider move faster. This affects your ability to read and controlling your experience of language, in a very similar way that a book may pace your experience of the text. But they challenge the nature of reading and what is able to be read. Words still exist but they blur then come into focus, forcing you as a viewer to distinguish between reading and seeing. 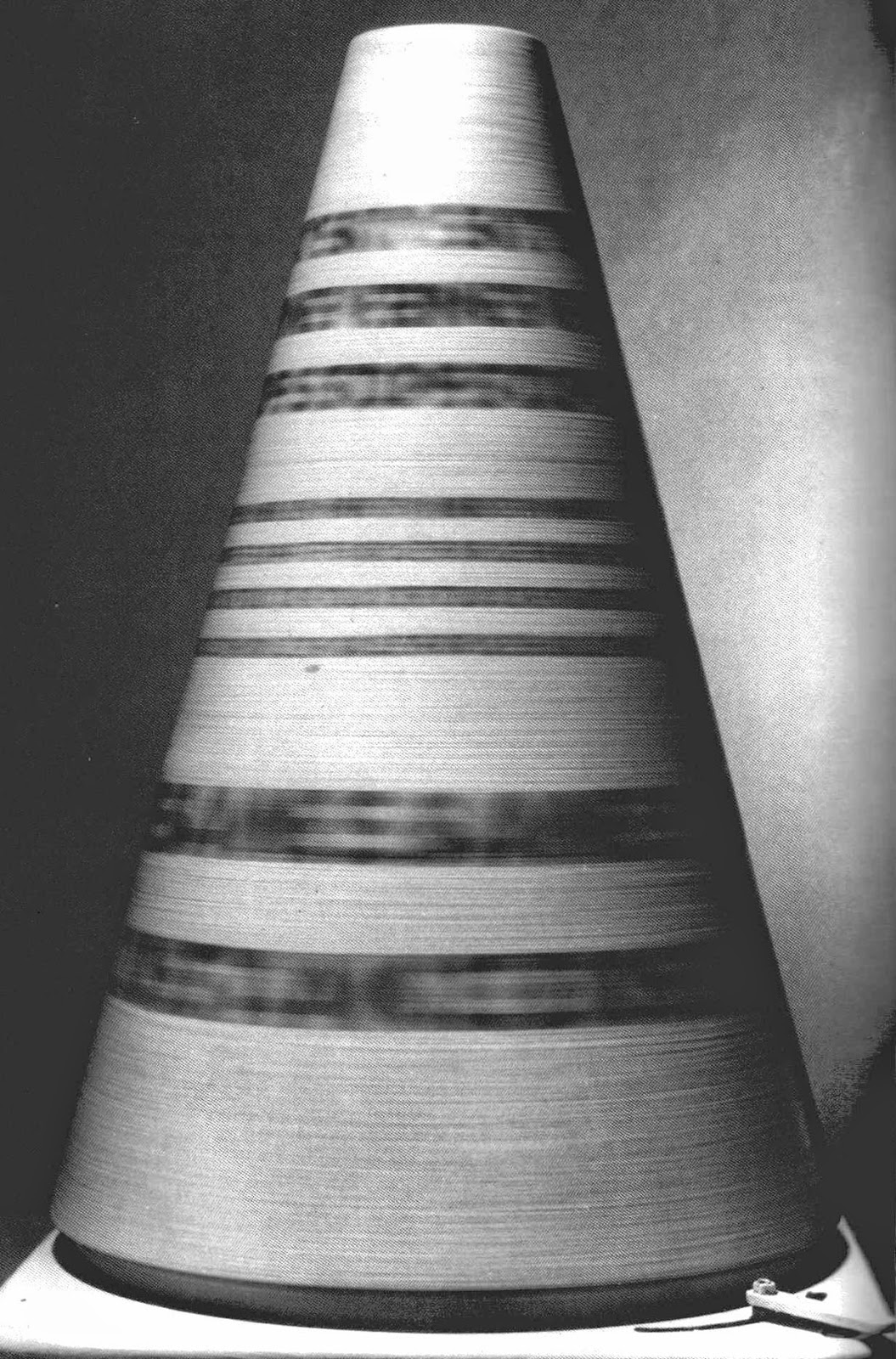 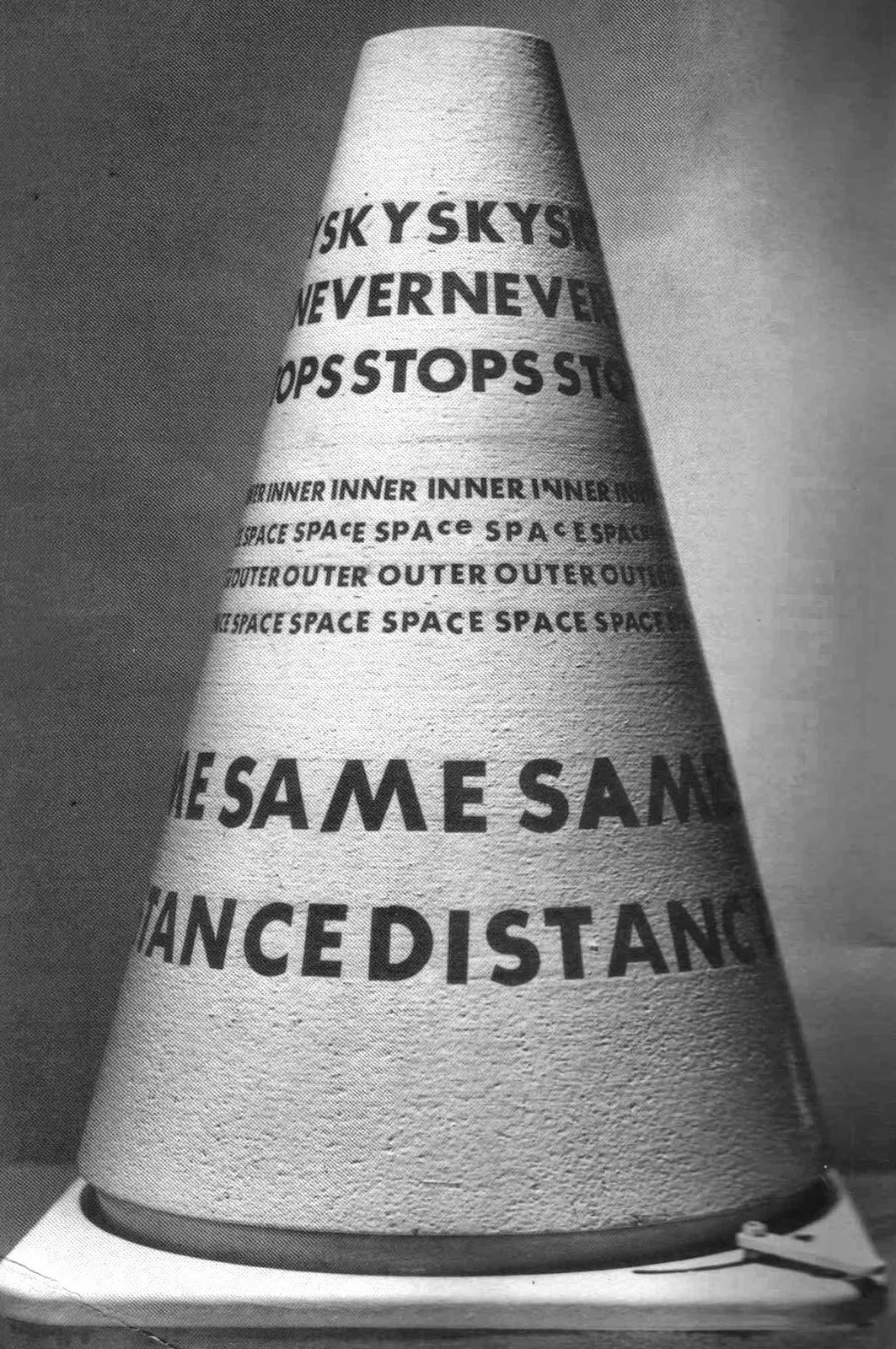 Another peice of work I would like to look at is: 'An Exhibition to Hear Read'. Where the book is used to be read from and broadcast out. Where reading is used to fil the space.


'An exhibition to hear read proposes the notion of speech as material gesture, in which both the texture of the word and its spoken quality are inscribed in space and time through the act of reading.  The vocal interpretation of these artworks constructs an abstract and ephemeral reality that can be said to sculpt the spaces in which it occurs. This ongoing investigation into the materiality of artwork as a question of word and speech is crystallized through a series of publications that act as both score and memory.' (Matieu Copeland)

The book here is one of the most important parts. It facilitates reading and in reading it opens itself up to a much larger space than it contained before.

I think that I am now going to start thinking about my work in terms of how it might be read. At least in terms of how it can be read aloud. How can this change the work and can it be to its advantage. It takes the personal experience of the book and relays it as a communal one. In a way the reader claims the text that they are reading and reveals it as a performative act. Almost as if they are actors performing a script.

The images on this page are generated by "visually similar" Google image search for brass pull cord bayonet type lightbulb lamp holder traditional earthed.  An algorithm pulled them out from the vast archive of Google images for me.

Somebody said that digital database defines the 21st century.

A couple of weeks ago Books in Browsers 2014 took place in San Francisco. Most of their talks are now available on YouTube, including the one from Johanna Drucker Database Narratives in Book and Online. She gives a neat introduction into what she believes to count as a book*. She then admits homicidal feelings towards those who think otherwise, and continues with her fascinating talk on the structuring of a narrative as an online database and a consecutive print output.

At the core of Johanna Drucker’s talk is her personal project, where she attempts to reign in the archive of her unpublished works, the records of which span about 40 years of writing. In the process of this experiment she scans her unpublished works to create an online representation of the library and to explore it’s relationship to the potential printed book as well as the original manuscript. She works in xml format and her archive is heavy with metadata. Metadata fields, she says, allow to structure multiple kinds of chronological and temporal organisational filters: they allow to redistribute literal temporality built into most of the narratives.
Johanna Drucker talks about the relationship between the networked resource and a printed output. What would the role of the printed book be in relation to the database? Is it a catalogue of the archive? Is it a guidebook? Is it an interface providing an augmented experience of the web environment?

Those questions, of course, can be asked about any book published from a database. Wolfgang Ernst in his essay The Archive as Metaphor** observes that archive as such does not contain narratives: it is a purely technical practice of data storage.

The archive does not tell stories; only secondary narratives give meaningful coherence to its discontinuous elements. In its very discreteness the archive mirrors the operative level of the present, calculating rather than telling. In the archive, nothing and nobody ‘speaks’ to us – neither the dead not anything else. The archive is a storage agency in spatial architecture. Let us not confuse public discourse (which turns data into narratives) with the silence of discrete archival files.

When traditional paper archives migrate into digital forms, their contents get reduced to a binary code. As a result, computer stops separating stored file information and processing rules (as in traditional archives).


When both data and procedures are located in one and the same operative field, the classical documentary difference between data and meta-data (as in libraries, where books and signatures are considered as two different data sets) implodes.

Digitalised memory undoes the traditional supremacy of letters in paper-based archives; instead, sound and images enter as well which can be addressed in their own medium: melodies can be retrieved by similar melodies, images by images, patterns by patterns.

Metadata allows to break the syntagmatic relationship between the items in the traditional database, in favour of highlighting paradigmatic links. While a collection of data in its own right has no narrative, it is how we travel through the archive: how we connect its fragments and how we fill in the gaps, that gives linearity to the experience.
Is clever manipulation of metadata enough to function as a guide for the reader? Or would database benefit from a printed interface providing an augmented experience of the web environment?

An expansive volume of writing and artwork is available on the subject of archives, database generated narratives, collaborative authorship, etc. Below I have chosen a couple of works and texts that I had found fascinating:

art:
Listening Post by Mark Hansen and Ben Rubin
Pockets Full of Memories by George Legrad
Postcards From Google Earth by Clement Valla
I’m Google  by Dina Kelberman. (I did not get to the end of it. If you do, can you let us know what’s there at the bottom?)
Girls on White by Rebecca Lieberman


* Book is a a structured sequence of intertextual components that have a structural relationship to each other, each of which is coded in order to participate in the semantic field of the book as a whole.

On a recent visit to the Hayward Gallery I came across Sasha Pirogova's Biblimlen (2013) - a playful video in which various characters act out small, expressive scenes within ’s grand Russian State Library. In one scene, a man obstructing the catalogue card system unwittingly becomes part of the system himself as a library visitor opens drawers around him, suspending him between them. The scene is available on YouTube.

It was refreshing to see such a fun and physical artwork and it’s great that the library, its furniture and its conventions are integral to it. The work made me wonder if the library had inspired the artwork. In the video it appears as an archetype with its rows of partitioned desks, hooded reading lamps and mazes of shelving. It's a fertile place for the imagination.

This led me to think of the bland libraries of my youth (particularly the academic ones) - all metal shelves and mismatched office furniture - and I wondered if a beautiful or distinctive library might be a more conducive place to read or study?

I am often drawn to art that is created in or exhibited in a specific place, as it has the power to make us reassess our own relationship with that venue – in this instance Pirogova’s artwork makes us see libraries in a lively and inventive way – turning them from quiet, sometimes stifled places, to ones of surprise and imagination.

The artwork is on display until 9th November 2014 as part of the exhibition Burning News.