Through my own practice I have become fascinated with the place in which text or language sits. This might be within the intimate confines of a book or in an open ‘public’ space such as a gallery.

In terms of the intimate book Holland Cotter sums up nicely the intimacy shared with the object. ‘…books are created for one-on-one interactions. They are, by nature zones, of privacy. There is no way, short of censorship, for an outside observer to or control the intimate encounters they offer…’ (Cotter, 1994

There is a certain quality in reading that absents us from the world around us. A certain skill in the author perhaps that takes you beyond the world in which we are. None more is this escape apparent than in the work of André Kertész. ‘Thriving on the paradox that even in the most crowded, public space one can enjoy such a solitary, private activity’ (Smart, 2009) 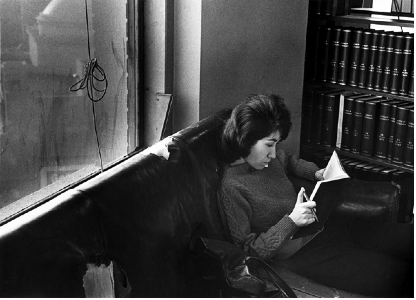 ‘Blissfully unaware they are being snapped, Kertész's subjects appear transported, fleetingly removed from life as we know it, into their realm of reading.’ (Smart, 2009)

I find that intimate engagement with a space fascinating. All your attention given over to an object. Or rather language/text within an object. It is a direct connection with language. 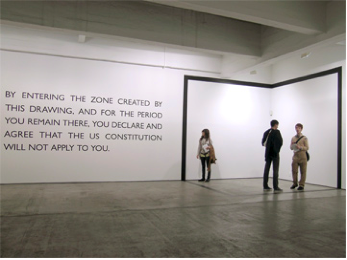 In a public space however this may change. Carey young an artist who works within the realm of officialdom, legal contracts and bureaucracy become the method of communication., The control is often subtle but can be brash. The language and place are key elements to her practice. Place that is dictated by language and language that is dictated by place. Often working with legal teams, the work is about the boundaries we share everyday between rules that govern our place and that place we move around in.  ‘In this work, a legally-impossible contract is established between artist, art gallery and viewer, questioning the notion of information, independence and control in liguistic and special terms.’ (Young, 2005)

The language subverts the space in which people move around. This is the space at large taking control of movement and understanding. It is a shared connection with language.

The language/text will always reference the place it is put in, as it relies on this space for existence. Words sit on walls and on pages. The joy language has in space is that it is in that space; on paper, on screen, in the ear, always held by the physical. As much control language can have over a space with regard to the words, the space is always there as a constant reminder of the words fragility. Language will always be about space if it conjures up a world or describes an environment, even floating though a concert hall and connected though the internet. But language is not solid and it can change states through this space. Language can so easily transform from the intimate space to the public and vice-versa. As much as it relies on this place as a carrier it can so quickly take control. Words read aloud are transformed from an intimate space to a public one. Spoken language written down goes from the public to intimate. It is not so much the control these spaces and the language has it is the fluidity of language to bridge these spaces. Space whether intimate or public will always hold language. It is only in languages power to make us realise this space where its control lies.

Smart, A. (2009) André Kertész: On Reading, at The Photographers' Gallery. The Sunday Telegraph. 17 July. Seven Magazine