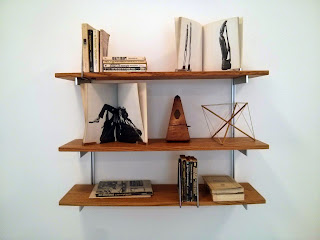 The artworks in each had a very similar flavour - they were beautifully presented, simple in nature and thoughtful in different ways. A particular highlight was Carol Bove's work of art 'Conversations with Jorge Luis Borges' which takes the form of three shelves, holding various objects. Describing the artwork, the gallery states:

"Holding books, a metronome and string object, its references point to Bove's research into the subconscious, Utopian ideologies, meditation and the appropriation of Eastern thought in 1960s America. Frozen in Bove's chosen arrangement, this experiment tries to seize a picture of a particular cultural period." 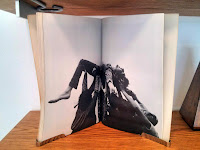 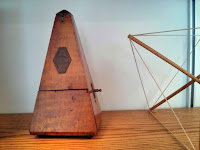 There's something very satisfying about this tableau, it sits somewhere between being a sculpture, a still life, a ready-made or a physical bibliography. It has a strong visual appeal; the uniformity of the shelves and the mix of objects creates a bold image, and is intriguing; the choice of books and objects used evoke a narrative, they evoke a specific time period (through the choice of shelving, and the age of the chosen books) and hint at a certain academic discourse through the books chosen. 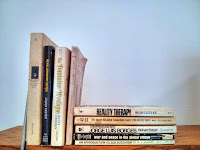 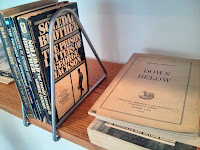 I would love to make an artwork that is so confident, but simple, one that creates such possibility, whilst appearing so restrained. A beautiful catalogue is available to accompany the exhibition.