Books at the 2015 Venice Biennale

Earlier this month I was lucky enough to visit the Venice Biennale and one thing that struck me was the amount of art involving books – clearly Collective Investigations is bang on trend!  I wanted to outline them to briefly document the incredibly diverse ways that books are used within contemporary Fine Art.

Of the Biennale’s two sites, I’ll start with the Giardini. The first work I came across was a humorous, zine-like series of comics presented next to two newspaper kiosks full of fabricated publications by Francesc Ruiz entitled 'Il Fumetto dei Giardini' in the Spanish Pavilion. They contained a story featuring two gay characters (lifted from existing Italian comics) having debates in various parts of the Giardini itself. The work was playful and thoughtful. The most successful element was its site-specific nature, as the locations in the comics were not only places I knew well (from previous visits) but were places that I would be visiting and discussing myself that day. 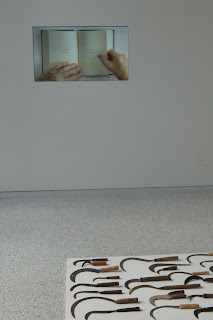 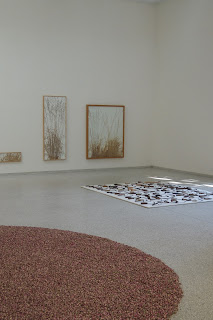 The second was part of the Dutch Pavilion. herman de vries' meditative 'to be all ways to be' is a layered-multimedia installation featuring a circular carpet of dried flowers, a selection of agricultural tools, watercolour paintings of colours and a video featuring the pages of a book being turned. The video, which was meditative in itself, was like an old agricultural dictionary featuring Latin names of plants. The strength of the work was that it added a time-based element to exhibition, a potential cue to pace the audience, encouraging them to slow down and take their time.

'Latent Images, Diary of a Photographer' by Joana Hadjithomas and  Khalil Joreige linked the two pavilions. In the Giardini this took the form of a public reading. An actor at one desk turned pages of a book and cut open sealed pages to reveal texts (texts which described unseen photographs). These were then read aloud one by one by three actors at another desk. Every day the same performance takes place using a new copy of the same book. In the Arsenale a huge wall housed the books for each day, alongside a desk providing a handling copy for guests to cut open and read. This work was engaging on several levels, not least because viewers could experience the performance in one venue and carry it out for themselves in the other – making for a very different reading.

Other work in the Arsenale included a publication by ('From The Horde To The Bee') by Marco Fusinato about capital. Copies of the book were piled up around the edges of a large table – a table empty except for a large mound of Euro notes. The notes were left by visitors in exchange for a copy of the book – an act that brought the content of the work into focus. 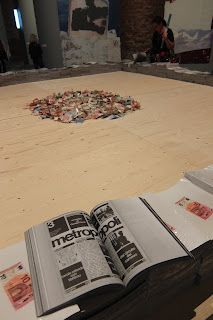 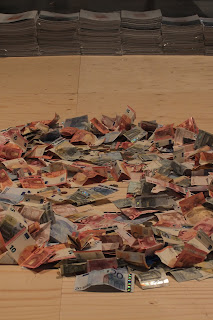 An artwork that I particularly liked was Mariam Suhail's handmade books ('To Propose a Site for a New Capital City') about inhabiting the urban environment as it used the language of books (i.e. what a book should look like and what it should contain) to mix the corporate and the personal. The books were made to look like manufactured, hardback books, but had the warped and less-than-perfect finish that can mark a first attempt at book-making.

The Arsenale also contained three other bookworks including 'The Diaries' by Peter Friedl, the archive-like 'A Morning Breeze' by Petra Bauer and 'Albanian Trilogy: A Series of Devious Stratagems', by Armando Lulaj which had a museological feel. The theme that connected these was that they each used display systems or the language of the archive to give the books they contained a different type of presence.

I hope this has provided an overview of the ways in which books can manifest themselves in different ways in contemporary Fine Art.