On Monday I went to see the recently opened ‘Conceptual Art in Britain 1964-1979’ at the Tate Britain and it was nice to see the exhibition of books and the interesting challenges that that faces.

‘The book is a medium that requires no visual display other that to be read, an the active mental participation of the reader. The book imposes no information system but the printed image and word; it is a complete entity in which both public and private documents are reproduced. The book is a collection of photographs, writings and ideas - it is a product of thought and of imagination. It is a result of concrete activities, and serves to document, and to offer information as the means and material of art’ 1. 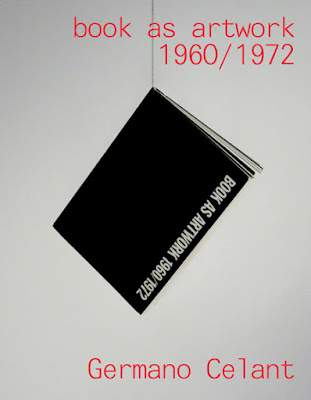 Germano Celant's ‘Book as Artwork 1960-1972’ 1972 was produced to accompany an exhibition at Nigel Greenwood Gallery in London and was the first critical consideration of the artist's book.

In the introduction he describes the point at which book arts evolved:

‘At that time, there was a move away from an informal art, which was visual and in which the information was emotionally charged… This art had been made up of traditional artisan techniques of communications (like colour, collage, dripping and action painting) leaving little scope for public participation. The move was towards an informale freddo, involving the spectator. The visual and physical data of this technique was achieved through technological and biological media, possessing a small visual content, but demanding a high degree of participation and contemplation from the spectator.’ 1. 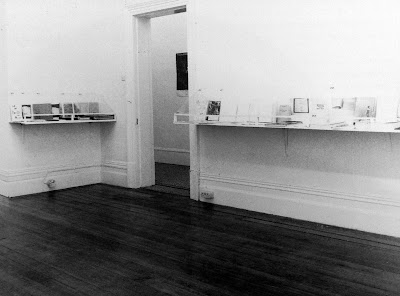 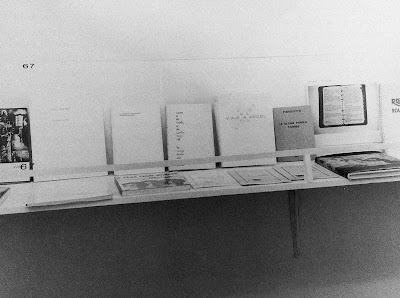 The Book as Artwork exhibition showed books in in clear perspex vitrines along the outside of the wall. These were only partially closed so that rarer books at the back could be displayed and those that could be handled placed nearer the front. 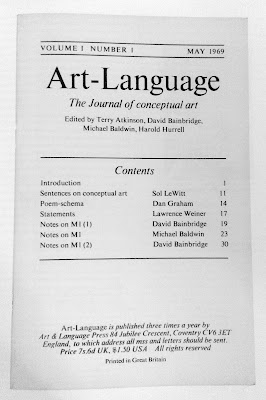 The evolution of the book form in art can be linked to an adoption by artists as a way of dissememinating their work. Such as the artists group Art & Language. In the exhibition at the Tate the original publications were kept in vitrines with facsimiles of the pages pasted on the wall. Allowing the gallery visitor the chance to read the work. The only failing of this system was time, but it gave a nice contrast to the idea of art object and art communication. Preserving the original intent of the object in communicating and sharing information. The work (the book) is a container for the ideas and is a vehicle for them. The design choice of the book, had to be matter of fact and functional, in order to work as read information. Though the book is still a vital component and is much a part of the ideas contained within.

‘A little about the form of the ideas. There have been, and still are, artists “who write” as a supplement to their object work. The artists who founded Precinct Publications have increasingly, over the past two years, been placed in a position such that they  “only write”, and as such many people, it can be assumed, would not allow them qualification “artist”. It matters not. The crucial question is not, whether or not they are artists, but whether or not their remarks, assertions, etc. hold out as relevant to certain problematic aspects of art today. The artists think, rightly or wrongly, that these aspects sufficiently warrant their attention for them to form Precinct Publications as vehicle through which their ideas can be made public.’ 2.


If you have a chance I urge you to see the show. It brings together a lot of examples of reading and language, through books, within a gallery space.