Editions of Alec Soth's Sleeping by the Mississippi

Alec Soth // Sleeping by the Mississippi from haveanicebook on Vimeo.

‘Gathered Leaves’ is a photography exhibition at the Media Space in London’s Science Museum featuring images by contemporary American photographer Alec Soth. The works, which represent four of the artist’s projects, are large in scale and have a documentary feel; representing marginalised people, places and aspects of modern American life. The title of the exhibition is drawn from a line in Walt Whitman’s ‘Song of Myself’; a poem which “explores the possibilities for communion between individuals”* - seen through this lens it’s hard not to feel emotional about the subject of the images, particularly the people that are caught within the frame.

It’s clear that books are important to the artist’s practice – they are included in the exhibition (in the form of traditionally bound publications, pamphlets and newspapers) and also the accompanying catalogue, which has a novel design, contains smaller publications within it. The artist has his own imprint: Little Brown Mushroom.

Of interest to me is the room devoted to the project 'Sleeping by the Mississippi' and in particular the small collection of books displayed in a vitrine at the beginning as they represent several ways of exhibiting the photographs. In the vitrine there are six books; 'From Here to There: Exhibition Notes' a guide to photos in the series, two handmade maquettes for 'Sleeping by the Mississippi' and three traditionally published editions.

The first book 'From Here to There' (2000, pictured below) contains images from the project, with descriptions - its content and utilitarian structure (spiral binding) give the suggestion that the book is purely functional - it is described as unpublished exhibition notes, so was likely made for personal use, or use by a gallery. The book is inkjet printed, giving it an unpolished, handmade quality. 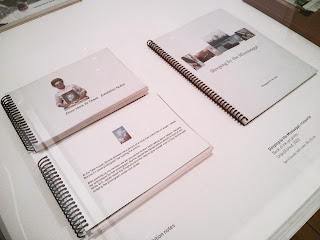 Next to this is another simple, spiral-bound edition (2003) of ink-jet prints. The book includes the title of the project and there is a montage of photos on the cover. The montage gives the suggestion of narrative and hints at the idea of a journey. Could the artist be consciously using the book form as a means of exhibiting and curating the photographs (instead of just a means of documentation)?


Following this is a self published edition (above) in a brown, cloth-bound cover, featuring embossed gilt text and an inlaid image. The cover is simple and well-made and the inlaid photograph is evocative of the others in series. The attention to detail in this edition gives the project a sense of gravity - and the books finish makes it a very appealing object. The fact that the book is self-published (clearly at quite an expense) gives the suggestion that exhibiting the photographs in this medium was certainly a conscious decision. 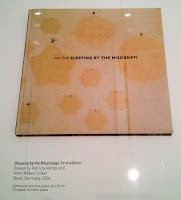 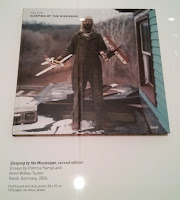 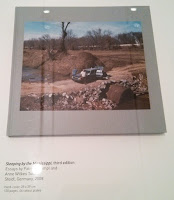 Finally, included are three conventionally published hardback editions by Steidl (2004, 2004 and 2008) featuring 46 colour plates and essays by Patricia Hampl and Anne Wilkes Tucker. The first features a textured cover with an image of a faded wall where signs used to be tacked, the second a portrait and the third a grey cloth-cover with inlaid image, similar the brown, self-published edition.

The fact that the book has gone into its third edition suggests that the project is an incredibly popular one and being printed by such a prominent publisher and including essays by critics certainly gives the work legitimacy. For me these last editions are fairly conventional and therefore a little dryer - perhaps it is because they don't appear to reflect the hand of the maker in the same way as the first ones do. It makes me wonder whether this detachment makes the artwork inside less visceral? Instead of the publication being an artwork itself, it is more like a coffee-table book.

I think it is excellent to see the evolution of the books surrounded by the images on the gallery walls - it gives a suggestion of historical context and shows that an artist's work can be in a constant state of evolution. Each room within the exhibition contains vitrines with publications and each provides a different insight into the artist's practice.

*SparkNotes, Guide to Whitman's Poetry
Posted by Unknown at 10:00