Book designer, typographer, teacher and writer Jan Tschichold popularised the idea of Cannons of page Construction in the mid to late twentieth century, based on the work of J. A. van de Graaf, Raúl M. Rosarivo, Hans Kayser, and others. These ways of structuring the page are very interesting although very rigid. I wonder if they have a place within modern design or are they seen as bit old fashioned and stifle creativity.

“Though largely forgotten today, methods and rules upon which it is impossible to improve have been developed for centuries. To produce perfect books these rules have to be brought to life and applied.” Tschichold 1.

Jan Tschichold, wrote three works concerning typography; Die neue Typographie (1927), The Proportion of the Book (1955) and The Form of the Book (A collection of essays written between 1937 and 1975 that discusses all elements influencing classical book design.) For many years, he worked for Penguin Books where he laid the foundation for the design of their paperbacks. 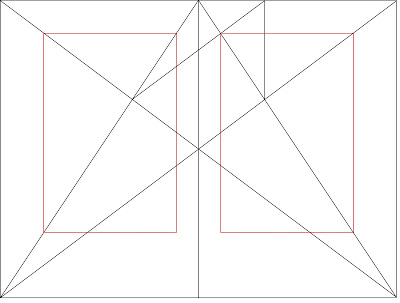 He measured a number of old books and manuscripts and discovered a number of different systems. One discovered by J. A Van de Graaf and written about in his book, Nieuwe berekening voor de vormgeving (1946). Van de Graaf's canon works with any page size and allows the text body to be placed within a pleasing and functional part of the page. The resulting inside margin is one-half of the outside margin, and proportions 2:3:4:6 (inner:top:outer:bottom). The position of the text in this way is not only aesthetically pleasing but has a practical function, in giving space to read and hold the book and giving enough space within the page for printing. 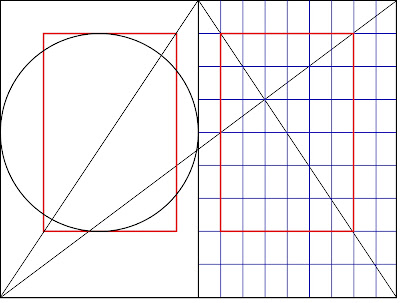 Tschichold's "golden canon of page construction" combined with Rosarivo's construction by division of the page into ninths. These two constructions rely on the 2:3 page ratio to give a type area height equal to page width as demonstrated by the circle, and result in margin proportions 2:3:4:6.

Raúl Rosarivo analyzed Renaissance books with the help of a drafting compass and a ruler and concluded in his Divina proporción tipográfica ("Typographical Divine Proportion", first published in 1947) that Gutenberg, Peter Schöffer, Nicolaus Jenson and others had applied the golden canon of page construction in their works.

According to Rosarivo, his work and assertion that Gutenberg used the "golden number" 2:3, or "secret number" as he called it, to establish the harmonic relationships between the diverse parts of a work, was analyzed by experts at the Gutenberg Museum and re-published in the Gutenberg-Jahrbuch, its official magazine.

‘the height of the type area equals the width of the page: using a page proportion of 2:3, a condition for this canon, we get one-ninth of the paper width for the inner margin, two-ninths for the outer or fore-edge margin, one-ninth of the paper height for the top, and two-ninths for the bottom margin. Type area and paper size are of equal proportions. ... What I uncovered as the canon of the manuscript writers, Raul Rosarivo proved to have been Gutenberg's canon as well. He finds the size and position of the type area by dividing the page diagonal into ninths’ Tschichold 2. 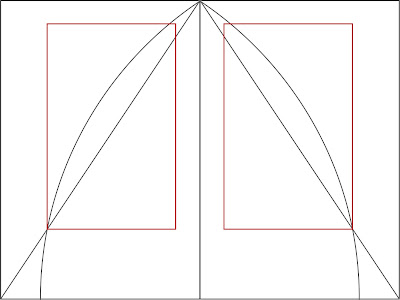 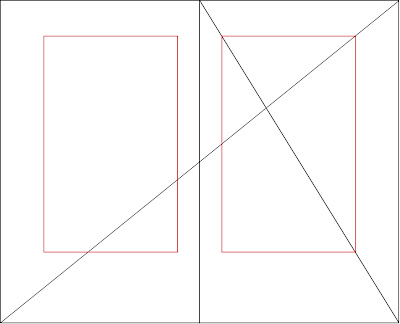 Building on Rosarivo's work, Jan Tschichold and Richard Hendel asserts that the page proportion of the golden section (21:34) has been used in book design, in manuscripts, and incunabula, mostly in those produced between 1550 and 1770. Hendel writes that since Gutenberg's time, books have been most often printed in an upright position, that conform loosely, if not precisely, to the golden ratio.

These page proportions based on the golden section or golden ratio, are usually described through its convergents such as 2:3, 5:8, and 21:34.


This video nicely demonstrates building up the structure of the page:

Canons of Page Construction from Aaron Zalonis on Vimeo.