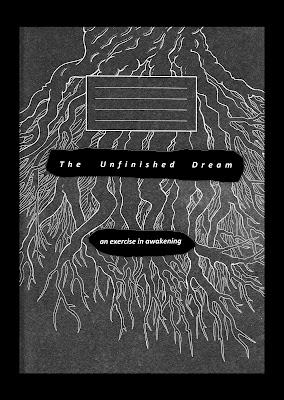 For my practice-based PhD in utopian poetics and experimental writing at the University of Westminster, I’m researching the utopian philosophy of Ernst Bloch and the artist books of Theresa Hak Kyung Cha.  I’m coming towards the end of my first year, and the first fruit of creative practice is the project called The Unfinished Dream, a collaborative work with illustrator and animator Joe Evans.

The Unfinished Dream began as an experiment in applying Ernst Bloch’s utopian theory to creative writing practice, inspired by the text works of Theresa Hak Kyung Cha.  Both Bloch and Cha explore the relationship between subject and object (self and other).  Bloch suggests that the experience of non-alienation, where the subject (the individual) experiences itself as not-separate from the object (the world/the other) is the essence of the utopian.  Cha embodied this desire to create an experience of non-alienation between the subject and the object in all of her major text, film, and performance works.  The Unfinished Dream experiments with these ideas and has developed into a collaborative project that keeps growing and shifting – an unfinished and unfolding creative process.

For Bloch, the utopian function of art and literature is to facilitate the ‘self-encounter’ (100), the recognition of oneself in and through an encounter with the other.  For Cha, as for Bloch, the art object becomes a space of encounter between the artist and the audience where each fulfils the roles of both subject and object in their interrelationship with one another through the work.  One of the forms used by Cha for realising this connection was the artist book.  The book is an object of intimacy, a space in which the reader and writer are drawn together through the page.  The book, as an object, is designed to be held and engaged with in a one-to-one relationship between the writer/maker and the reader.  Cha uses scriptovisual techniques to create a relationship between text and space, words and silence, self and other in her artist books.

I’m interested in exploring this strange relational space between artist and audience, writer and reader, self and other as an experiment in the kind of non-alienation that Bloch ascribes to the utopian function of art and literature.  I’m interested in the ways that the book form can facilitate this kind of an encounter between subject and object, self and other.  What kinds of spaces need to be opened up within the text for the reader to project herself into?  How might the relationships between text and space / word and silence / text and image / image and space engender a performative experience of non-alienation for a reader encountering the book object?

To experience something, we often need to encounter it physically, via our sense organs.  In this sense, and in others, the physical relationship between the book and the body is integral to the project.  I’m also deeply interested in the physicality of the book form, its materiality and its function.  Below, I describe some of the processes and ideas behind the creation of The Unfinished Dream, the first part of my creative practice for this three-year PhD.

The physical object of the book is a central concern of The Unfinished Dream.  The experimental writing collection explores the ways that the materiality of the book is often ignored and made invisible at the expense of the words and ideas it contains, in a similar way perhaps to the relationship between the physical human body and the concepts and ideas that are generated by the mind.  The Unfinished Dream explores writing, drawing and creative practice as embodied, physical processes – processes that take place in, of and through the body, and which may be experienced physically, viscerally and emotionally by those who come into contact with them.

Similarly, the general invisibility of the book form means that culturally we take for granted the codex structure which has become synonymous with what a ‘book’ is.  Historically though, and across geographical and cultural spaces, different forms such as scrolls, wrapped papers, and now digital platforms have provided alternative ‘book’ forms with different relationships to structure, linearity and temporality.  The codex form developed with Coptic Christianity and encodes the linear, teleological (end-focused) structure of the biblical narrative.  What happens when we question these invisible assumptions that structure the stories we tell ourselves, and the stories we tell of ourselves, so implicitly?  The Unfinished Dream explores the human relationship to the codex form and the teleological narrative it encodes and embodies.

Ernst Bloch describes utopia as ‘in the process of being’ (15).  For Bloch, utopia is a process rather than a destination and as such it is non-teleological.  Cha’s major artist book Dictee embodies a non-teleological structure in that there is no temporal narrative development throughout the book, and her use of repetition to return to key thematic images and ideas gives the book a cyclical or circular structure, despite its codex binding.  The Unfinished Dream embodies a similar structural rhythm in an attempt to disrupt the teleological structure of the codex form via its content.
The book also explores the relationship between words and silence as represented by the spaces between words and phrases on the page; the relationship between words and images; and the relationship between parts of words through the non-standard use of the square bracket.  Each of these relationships has the potential to generate multiple possibilities through the gaps in between two elements and/or the dissonance generated between two or more contradictory parts placed together.  This is intended to have a twofold utopian function in that it disrupts teleological structural development by offering a profusion of possible pathways through the book as well as situating the reader as a co-creator of meaning, as each person encounters and experiences the book differently.  In this way the boundaries between writer and reader become more permeable.  The  co-creative relationship between the reader and the writer/artist is at the heart of The Unfinished Dream, as the reader must complete and interpret the work of the writer and illustrator from the multiple possibilities that are offered both within and beyond the text.

When making The Unfinished Dream we also wanted to question some of the invisible assumptions which suggest that artist books must be artisan products, requiring specialist skills, materials and equipment to produce and displaying the skills of fine craftsmanship.  We love those kinds of artist books of course.  But we were interested in a kind of democratic creative process that didn’t fetishize the book as an object, that embraced real life physical processes and that aesthetically embodied the ideas contained within the book.

In addition to the artist book, The Unfinished Dream is also a short film and a performance.  Click here to watch the film (90 seconds; contains nudity).
To find out more about the project, including the film and the performance, please click here.

The Unfinished Dream is a project by [Sub]Atomic Books: Sally-Shakti Willow & Joe Evans