I’m going to take this post to write about the sharing and spreading of ideas, through learning from other people. What other people have to show us is not foreign or wrong but comes from a whole wealth of experience. Everyone has different backgrounds and it is obvious that we have learned the most and gained the most from our closest European neighbours. It is also only right that we preserve these networks for learning no matter what comes our way.

So as this is a book arts blog lets get start with books. An early form of the book is called an Incunable. An incunable is a printed book that was made before 1501 and comes at the formative stages of printing. "Incunable" is the anglicised singular form of "incunabula", Latin for "swaddling clothes" or "cradle", which can refer to "the earliest stages or first traces in the development of anything.” 1. And these first stages incidentally began in Europe.

As we all know Gothenburg invented a form of printing with moveable metal type in the mid 15th century. He used this technique to print his 42-line Bible in Latin, printed probably between 1452 and 1454 in the German city of Mainz. 2.

Gutenberg lost a lawsuit against his investor Johann Fust, so Fust put Gutenberg's employee Peter Schöffer in charge of his print shop. After that Gutenberg established a new one with the financial backing of another money lender. With Gutenberg's monopoly on printing revoked, and the technology no longer secret, printing spread throughout Germany and beyond, diffused first by emigrating German printers, but soon also by foreign apprentices. 3. Along with the sack of Mainz in 1642, the instability and unfavourable business climate created by the war caused an exodus of printers and other tradesmen, who sought more politically stable cities with commercial potential. As many early books were printed in Latin, the universal language of the scientific and religious communities throughout Europe, it made it easier for the pioneers of print to establish themselves outside their countries of origin. 2. 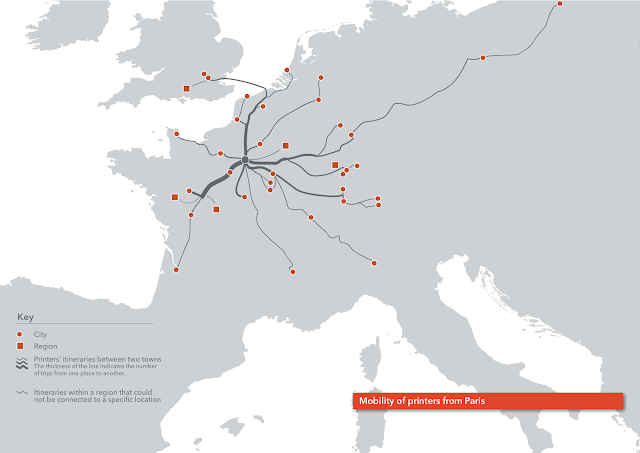 By convention, a printer's travels are indicated by a line representing the shortest, or most likely, path between two places. The thickness of the line indicates the number of journeys from one place to another. The dotted lines indicate itineraries within a region for which a precise destination could not be established. A question mark is used to indicate uncertainty. 4.

In rapid succession, printing presses were set up in Central and Western Europe. Major towns, in particular, functioned as centres of diffusion (Cologne 1466, Rome 1467, Venice 1469, Paris 1470, Kraków 1473, London 1477). In 1481, barely 30 years after the publication of the 42-line Bible, the small Netherlands already featured printing shops in 21 cities and towns, while Italy and Germany each had shops in about 40 towns at that time. According to one estimate, "by 1500, 1000 printing presses were in operation throughout Western Europe and had produced 8 million books." 5. According to another, the output was in the order of twenty million volumes and rose in the sixteenth century tenfold to between 150 and 200 million copies. Germany and Italy were considered the two main centres of printing in terms of quantity and quality. 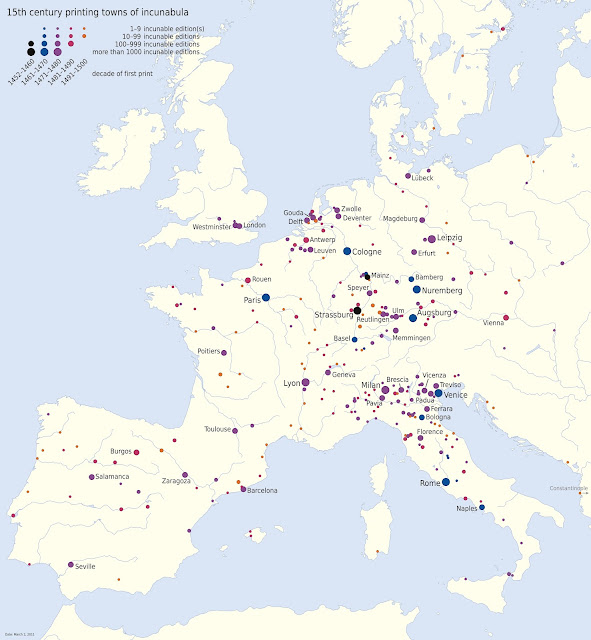 Spread of printing in the 15th century from Mainz, Germany 6.

If the printing press was so successful, it was because all of the physical conditions for its success were present – paper, a Chinese invention, was introduced into Spain by Muslims, and it expanded throughout Europe during the Middle Ages. Paper mills could be found in Sicily in the 12th century, in Fabriano (Italy) in the 13th century, and in both and Germany starting in the 14th century. 4.

The craft of printing evolved very quickly as printers sought to improve their techniques, carrying the tools of their trade and new ideas across Europe. Along the way the process grew into a more complicated business, with a number of allied trades and specialists supplementing and enriching their work. 2.

So I hope this tradition of sharing skills through the freedom of movement is maintained. Where people are valued for what they bring to a country and are not subjected to the hate of a few. Also I hope for us, that it does not dissuade people from wanting to do so. More so than ever we need to look out, rather than become stagnated from within.