Notes on the Ley - Isernia and the Patron Saint of Bookbinders

The fifth point on the Ley is Isernia. A curious stop but proves there is more than coincidence at work along the Arnolfini Ley.

Isernia is a town in the southern Italian region of Molise, and the capital of province of Isernia.1 The area of Isernia was settled at least 700,000 years ago and the nearby site called Pineta is supposedly the most ancient site where traces of use of fire by humans have been found.2 What has this got to do with books, well nothing. Except that this place was the birthplace of Pope Celestine V and what does he have to do with books! Well I assume nothing or a lot, but he happens to be the Patron Saint of Bookbinders,3 who would have thought it.

Patron saints are chosen as special protectors or guardians over areas of life. These areas can include occupations, illnesses, churches, countries, causes -- anything that is important to us.4 Pope Celestine V or rather Saint Peter Celestine as he is know nowadays, became pope in 1294 albeit rather reluctantly.5 He had spent most of his life as a hermit in the surrounding hills content with prayer, ritual flagellation and bookbinding!6 A bookbinding hermit, I find hard to believe but apparently there is truth in it and something that makes the Arnolfini Ley unique. I think he must have detested the job so much and dreams of bookbinding in solitude must of weighed heavy on his mind that five months and eight days in office he quit. He has been called ‘the most inept pope in history’.7 It seems he has become famous for being the first pope who quit. His last decree in office was to declare the ‘right of resignation’.8 The next pope to resign of his own accord was Pope Benedict XVI in 2013, 719 years later. Though he never regained his hermit life due to his successor, Pope Boniface VIII who opposed his resignation and was concerned he may become an antipope figure. So poor Celestine was locked up and later died in prison. 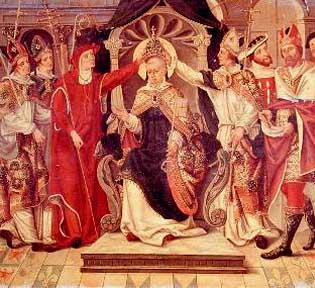 The coronation of Pope Celestine V in August 1294 B


He was canonised by Clement V on 5th May and was big on miracles. Eighteen in fact were considered by the cardinals on petition of his canonisation, though only 11 were actually taken as truth.9 For reasons of, lack of witnesses or they simply got the wrong guy. I have been hunting and hunting to find a list of his miracles but no joy yet. I was hoping there would be a book related miracle amongst them. Of the ones I have found: He cured a woman of paralysis10 and more excitingly Levitated.9 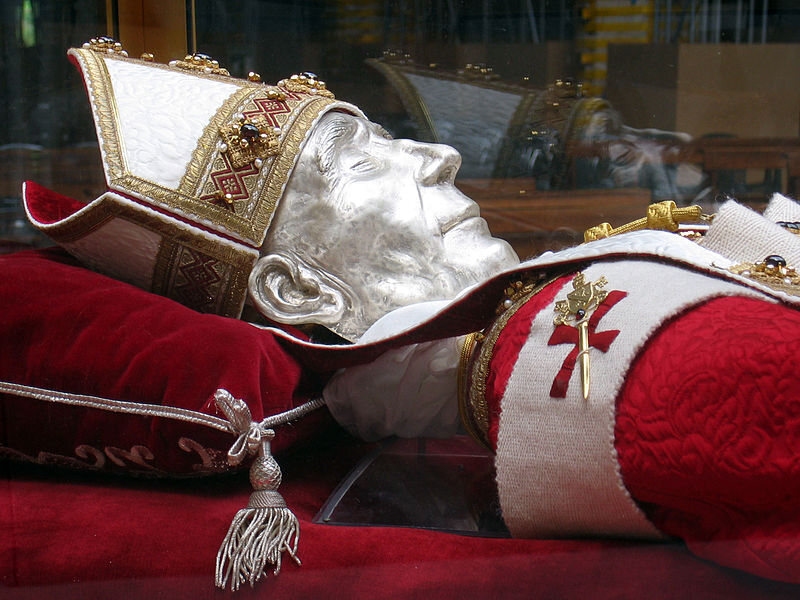 Saint Peter Celestine’s feast day is celebrated on the 19th May. So take a moment while binding or reading a book, to say a prayer to the Patron Saint of Bookbinders. You can even visit him yourself. His remains lie in the Church of Saint Maria di Collemaggio, in Aquila, Italy. 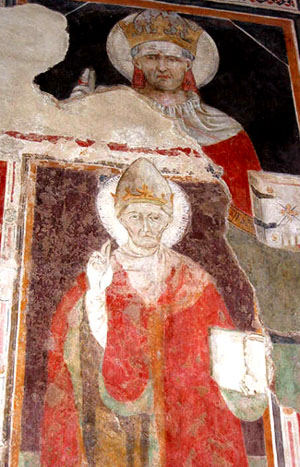 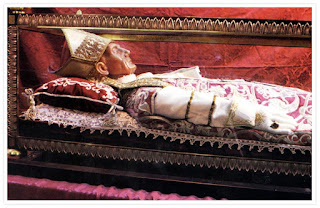 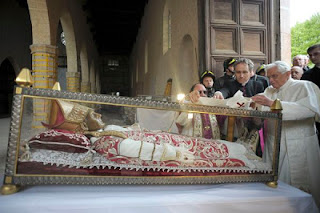 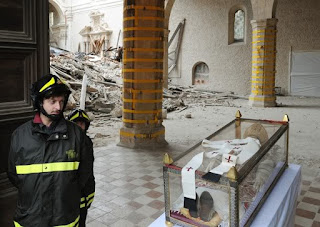 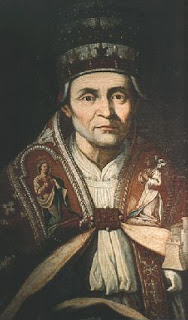